How to fill the gap between teeth naturally at home? 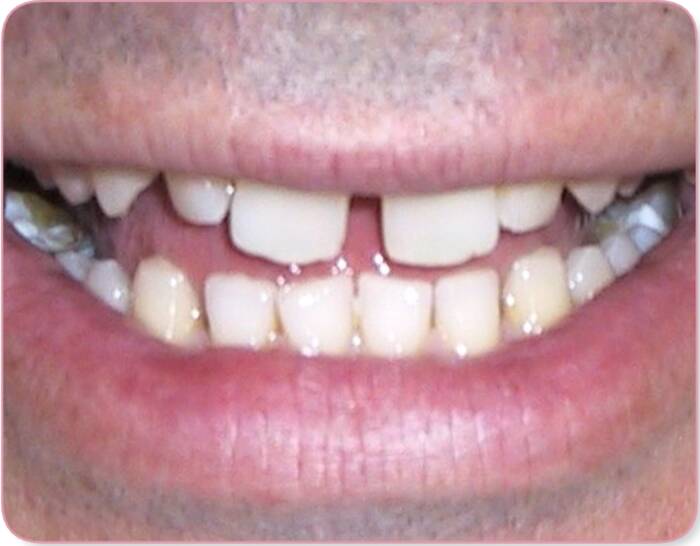 I. What Is the Diastema?

The gap between teeth is also called diastema. It is a rather large space between two teeth.

Although it is not a real medical emergency, for many people it is unsightly and unattractive.

The causes of diastema are heredity, the presence of a lip lock, an accident, or a hormonal problem during tooth formation.

Dental agenesis can also be the cause of diastema. It is an anomaly that manifests itself in the absence of one or more teeth.

Often present on the front teeth, the teeth can have a more or less important gap.

The risk, in this case, is the possibility that these gaps retain food which, in the long run, could lead to the development of dental caries.

Also, it is possible that diastema causes gingivitis or other types of gum pathologies.

However, it should be noted that overall, a gap between teeth is not a health risk.

In fact, this name is a sign that in popular culture, lucky teeth are generally considered to bring good luck.

II. What Are the Causes of Diastema

Diastema can be caused by a combination of factors.

The small size of the teeth in relation to the jawbone can be the cause of this space between them because they do not manage to occupy all the space that is in the jawbone.

Sometimes it is the jaw itself that is larger than normal (of course it is a few millimeters).

Even normal-sized teeth will not be able to take up all the space.

And these two major factors are unfortunately determined mainly by heredity.

There are also other behavioral causes of gaps between teeth, such as children sucking their thumbs for a long time and with great pressure on the crown of the teeth.

There are other causes.

For example, the way food is chewed in the mouth. Here again, the tongue makes strong movements towards the front of the mouth, so as to exert great and abnormal pressure on the incisors.

This forces the incisors to separate over time and create a gap between them.

Finally, there are diastemas that are caused by inflammatory disease of the gum, which loses its vitality.

Sometimes these inflammations seriously affect the gums and the small tissues surrounding the teeth and which fix them to the gum bone.

The weakness of the gums and tissues combined with a bad chewing habit will cause the separation of the teeth.

III. How to Fill the Gap Between Teeth Medically

When it comes to a diastema, not everyone is looking for the same thing. For some people, their good luck teeth are a charming asset that they don’t want to get rid of entirely. However, they do want to reduce the space, which they feel is too large.

There are many solutions to reduce the space between teeth. Dental veneers are one idea.

You can also resort to orthodontics or even prosthetic rehabilitation. Surgery is one of the most common options for tightening the gap between teeth.

It should also be noted that in many cases a simple tray is enough to fill the spaces between two teeth.

Ceramic veneers are a method of filling the space between your teeth. It is done without anesthesia, in only 2 sessions. The first session consists of taking measurements and impressions.

The second session is for the installation.

The ceramics are strong and thin. The veneers will naturally cover the gap between the teeth, and give a natural finish to your entire dentition.

If you have orthodontics, then it will be a matter of simply moving the teeth, gradually. Braces are then needed to naturally move the separated teeth closer together.

This type of treatment can last from 9 to 18 months. The results are quite good, not to say excellent.

In addition, the Invisalign solution exists to guarantee transparent and discreet orthodontic appliances.

This operation consists of crowning the teeth whose gap is to be corrected. The crowns are generally placed on the upper incisors. This method is preferred if the gap is caused by a narrowing of the teeth.

Prosthetic rehabilitation is very aesthetic since the crowns are the same color as the teeth themselves.

However, this type of operation involves grinding, a technique that is not very desirable for healthy teeth.

Your dentist may decide to perform surgery, especially if he or she finds that your diastema is related to a bad position or malformation of the lip brake.

The surgery may involve cutting the frenulum.

If you are worried about pain, you should know that today this type of surgery can be performed with a laser.

This means that you will not feel any pain, nor will you need any anesthesia.

By reducing the space between your gaping teeth, the surgery will prevent you from developing bacteria nests between your teeth.

IV. How to Fill the Gap Between Teeth Naturally at Home

In order to save money, you may want to tighten your teeth yourself. There are no really safe methods to do this.

The risks associated with unprofessional teeth straightening are very high. Infections due to misuse of objects, or broken or chipped teeth.

So avoid trying to straighten your teeth on your own as much as possible.

Although some people have had acceptable results with rubber bands.

# Tightening Teeth with an Elastic Band

Because of the cost of dental care, some people have developed tricks to solve the diastema “problem” on their own.

Rubber bands can be used to reduce or even eliminate the gap between your teeth.

The experiment that was conducted by an Internet user lasted 40 days and allowed him to reduce, without the intervention of a professional, his diastema.

To do this, you need to have thin, transparent, and small rubber bands. Then pass one of them around the teeth that you want to bring closer together.

There are several methods for this. The rubber band can be placed between several gaps and passed around the teeth several times to tighten the pressure. You can use 2 or even 3 rubber bands in total.

Another way to use rubber bands is to cross them.

There are certain rules that must be followed to ensure the success of this technique.

You must wear your rubber bands 24/7. You can do without them during your meals and while brushing your teeth.

It is also important to never use the same rubber band twice. To do this, you will need more than 100 rubber bands.

Be aware that during the first few days you will experience some pain. But this should not last more than a few days.

To avoid having too much pressure on your teeth, put only one rubber band on at night.

During the entire treatment period, avoid using your front teeth too much during your meals.

For this reason, try to eat as much as you can of soft food that will not put too much pressure on your teeth. Also, it is best to eat with your back teeth.

After 40 days, you should notice the disappearance of your diastema. But go see an orthodontist afterward and he will put a retainer on your teeth to keep them that way. Otherwise, your diastema will reappear.

Although this technique has been proven to work for some people, it is not certified. So be careful.

This trick can be risky, like all treatments that are not approved by professionals.

If you notice any bleeding, or if you notice that your teeth are moving in a way you don’t like, stop and see an orthodontist.

Despite the risks, this method can save you from having to undergo medical procedures to correct your diastema.

A diastema (plural diastemata, from Greek διάστημα, space) is a space or gap between two teeth.

Causes of a diastema

How Do You Hide Rotten Teeth?