Black Stuff on Teeth Near Gums, What to Do? 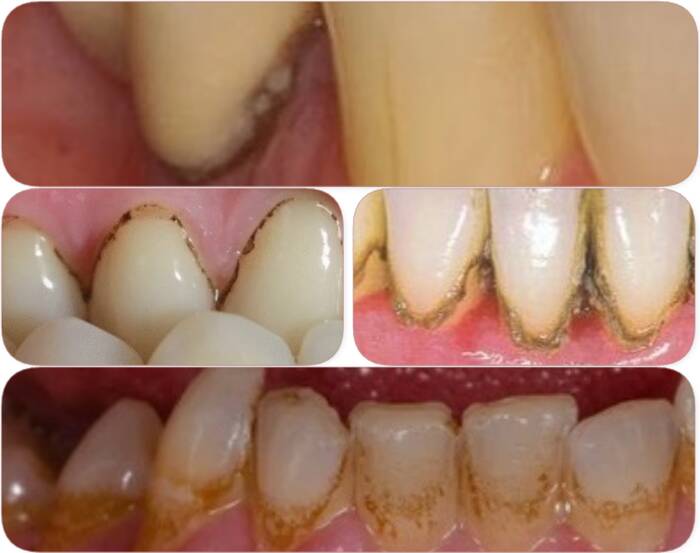 Black stuff on teeth near gums, what to do? What is black tartar? How do remove black lines on the teeth? What are the risks if we don’t treat this kind of problem? And finally, what health problems are related to periodontal disease?

I. What Is the Black Stuff on Teeth Near Gums?

When dental implants are placed, a black or grayish line may appear after a while. This dark line appears between the gums and the teeth, and can easily cause concern.

The black line between the gums and the teeth can appear following the installation of traditional crowns.

It is due to the material of the implants, which is often covered with a thin layer of porcelain that can show the metal.

This dark line is the metal of the crown coming out of the gum. The line appears with more force in case of gum recession.

As the tooth comes out of the gum, more of it is exposed. Gum recession is caused by an infection, bacteria that attack the tissues.

These tissues, which are supposed to allow the tooth to remain in the gum, are no longer able to hold it.

The tooth is more and more exposed, and we see the black border of the metal of the crown appear.

Another cause can be devitalization. A devitalized tooth can lose its natural color, and there can also be gum recession.

In these cases, the black border between the gum and the tooth is not caused by the metal. It is due to the appearance of the root of the tooth.

The last cause is simply black tartar that accumulates on the surface connecting the teeth to the gum, usually due to poor cleaning of the teeth.

II. What Is Black Tartar?

It is the dental plaque that is at the origin of tartar. When plaque accumulates, the deposit it forms on the teeth and gums hardens into tartar.

While tartar is usually light in color, it can be black. The place where tartar develops, as well as its age, can influence its color.

Below the gum line, tartar can be dark. Black tartar is formed from the same mixture of organic residues and bacteria as lighter tartar. But it also contains other elements. Elements such as blood derivatives, and gingival crevicular fluid.

Gingival crevicular fluid is derived from connective tissue and can occur in healthy tissue. This is especially true in cases of gingival inflammation and plaque.

III. How to Remove Black Stuff on Teeth Near Gums

Sometimes you may notice black lines on your teeth.

These can be lines or a thin border.

In children, this kind of line is considered to be a sign of rampant decay. This is a cavity that starts at the root of a tooth and spreads to the surrounding teeth.

Even young adults can see this kind of black line on a tooth.

This type of cavity is due to the consumption of sweets associated with poor dental hygiene.

In most cases, these lines are a sign of a dental problem.

The treatment involves first of all fighting the decay. The dentist must determine how far the decay has spread.

Then, the teeth will need to be repaired. There is a possibility, if the dentist deems it necessary, to cover the teeth with a protective substance. This substance will be similar to enamel and will serve as a shield against acid attacks.

Advice on lifestyle and dental care will also be given. As well as fluoride supplementation, to help teeth strengthen and protect themselves.

It should be noted that in many cases, a simple scaling at the dentist’s is sufficient to remove the black tartar that has accumulated as a result of poor dental hygiene.

IV. What Are the Risks if You Don’t Treat Black Tartar

Creeping decay, which appears as a black line on the teeth, can have serious consequences.

If this cavity is not treated properly, even if it attacks baby teeth, it can influence future teeth. Studies have shown that permanent teeth resulting from rampant decay are more fragile than average. This makes them more susceptible to disease.

In addition, rampant decay is likely to spread quickly inside the mouth without intervention.

It will attack the neck all around the tooth, and flush with the gum. The decay will destroy the tooth structure, infecting the gum tissue.

Tooth loss is an obvious risk.

In addition, it is important to remember that decay is a painful infection. The more it spreads, the greater the suffering of the person who has it.

In such cases, it is important to act as quickly as possible.

V. What Health Problems Are Related to Periodontal Disease?

Although they primarily affect the mouth and teeth, periodontal disease can cause other types of health problems.

We must not forget that the mouth is the gateway to the body.

Periodontal disease, by affecting the mouth and teeth, releases its toxins into the bloodstream.

The breathing and work of the lungs can be impaired by periodontal disease. Bacteria in the mouth and teeth can easily find their way into the airways.

Hormonal changes associated with pregnancy can cause gum bleeding. It has been shown that there is a link between pregnancy gingivitis and premature births.

The parotonditis present in the mother can thus affect the birth conditions of the child.

The risk of heart attack is increased in cases of periodontitis. Especially if it is associated with risk factors such as smoking or stress.

Why Am I Getting a Black Buildup on My Teeth?

What is Tartar? 6 Tips to Control Buildup

How to Stop Grinding Your Teeth at Night?

Black Spot on a Molar Tooth, What to Do?

What to Do with a Broken Molar Tooth?

Wisdom Tooth Rotting and Breaking, What to Do?