Can a Root Canalled Tooth Get Infected? 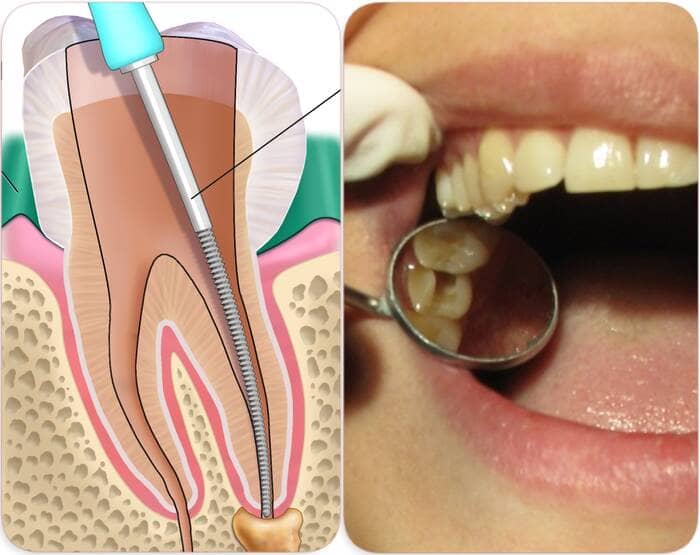 I. What Is a Root Canal Treatment?

A root canalled (devitalized) tooth is a tooth that has undergone a particular treatment: namely, the extraction of the pulp.

Since the dental pulp is practically the vital element of a tooth, once it is removed, the tooth is fragile and sensitive.

This is why it can start to take on a dark color, becoming a gray tooth. The pulp is irrigated by fibrils in the dentin.

The devitalized tooth without a crown loses its natural color, like a hematoma on the skin after a shock.

II. How to Devitalize a Tooth?

The devitalization of the tooth is done under local anesthesia. The dentist must enlarge the canals of the tooth to remove the pulp.

Once the pulp is removed, root canalization is done. This is called reaming and consists of scraping the edges of the canal to get rid of the bacteria.

A filling material, a paste or dental cement, is inserted into the space and thus freed.

III. Can a Root Canalled Tooth Get Infected?

1. How a Devitalized Tooth Become Infected?

Even though the dental surgeon cleans the canals of the tooth during a root canal treatment, it is impossible to empty the tooth.

Therefore, the risk of infection of a root canalled tooth exists. Germs can grow in the areas of the canal that have not been touched by the dentist.

This is why you may have a nerve-less tooth that hurts.

2. Why Do You Get Infection in a Root Canalled Tooth?

A root canal tooth can become infected at the root level. This is possible because some of the bacteria in the root of a tooth are anaerobic.

This means that they can survive even in an environment with little or no oxygen.

Because of these bacteria, an infection is possible.

This can even become a risk for the whole body.

3. What to Do to Get Treatment?

If you have an infection in the root of a tooth, you will feel pain and may even have a fever.

It is important to consult your dentist. But in the meantime, take paracetamol to soothe your pain.

Do not take Ibuprofen. Your dentist will take an x-ray of your tooth to detect the probable presence of an abscess.

He will unclog the canals of the devitalized tooth to treat and clean them. This is usually enough to make the abscess swell or stop the infection.

4. How Can I Avoid Having a Root Canal Treatment?

When a tooth is devitalized, you may have a gray tooth. This is not only fragile but also susceptible to bacteria.

For this reason, many people are looking for ways to avoid having a root canal treatment. One example is the inlay-onlay, in the case of broken teeth. This method can avoid the devitalization of teeth.

In the case of an infection that has affected the pulp, there is a method called pulp capping. Pulp capping prevents the tooth from being devitalized by preserving the part of the dental pulp that is still healthy.

Only the infected part of the pulp is removed, and a remineralizing bioceramic material is placed around the pulp.

Pulp capping is a method that in the past has been little used because it carries too many risks.

It is important to remove all the affected pulp to avoid the risk of infection. Today, bioceramic materials reduce the risk of pulp capping failure.

Pulp capping can only be performed if there is healthy pulp remaining. If this is not the case, devitalization is probably preferable.

Devitalization is a method that also has its risks, even if they are minimal.

Not only does a root canal treatment make the tooth brittle, but the root canal can become infected if the treatment is not done properly.

Consult your dentist to make the best choice.

IV. What Are the Diseases that Can Be Caused by Root Canal Treatment?

The danger of a root canalled tooth is infection. Bacteria lodged in the root canal of the tooth can spread throughout the body and cause respiratory diseases and brain abscesses.

It is also possible to develop cardiovascular disease, sinusitis, and kidney damage.

V. What Is the Relationship Between an Infection of a Root Canal and a Dental Abscess?

When a root canal becomes infected, it is common for the infection to manifest as a dental abscess. This is called a periapical abscess.

This abscess originates at the root of the tooth in question. It is the manifestation of the infection present at the level of the devitalized tooth.

Periapical abscesses occur even when a crown is placed. The crown that is placed after the root canalization does not prevent the infection, especially if the bacteria have remained in certain areas of the canal. The periapical abscess, therefore, develops under the crown.

VI. Other Questions About Infection of a Root Canalled Tooth

1. How Do You Extract a Root Canalled Tooth?

The extraction of a root canalled tooth is done in the dental office. The extraction is done if all other methods have failed and after a serious discussion with your dentist.

Under local anesthesia and in a sterilized area, your dentist will first remove the attachments from your tooth, before using some forceps to move it and extract it from the gum.

Depending on the case, a dental implant may be placed in its place.

2. Can a Root Canalled Tooth Cause Pain?

It is normal to experience pain after a root canal treatment, even swelling of the gums, even if your tooth is no longer a living tooth.

But this cannot last for several months. It is not usual to have pain in a root canalled tooth for a long period.

It must be a sign of a deeper infection. If your pain persists, it’s important to go see your dentist.

3. How Do You Know if the Root of a Tooth Is Infected?

Pain is the first sign of an infected tooth root. In this case, the pain is persistent, constant.

Next, you will notice some discoloration of the tooth. This is because the tooth is dying. Gaps and cracks appear on the tooth because it is more fragile.

When you press on your tooth, you are putting pressure on that root, which causes the pain.

See a dentist to find out more. An X-ray will tell you what you are suffering from.

5. Is It Normal to Have Pain in a Root Canalled Tooth?

A root canalled tooth can indeed cause pain. For the first few days after the root canal treatment, it is normal to feel pain.

You may even have swollen gums. But these symptoms are temporary. If your tooth still hurts several weeks later, see your dentist.

6. Why Remove the Root of a Tooth?

Removing the root of a tooth may be the only solution when the root has not been treated successfully.

But a root treatment can be a failure, and extraction of the root becomes the only way to stop an infection.

7. How to Relieve a Toothache after Root Canal?

You can take paracetamol for a post root canal toothache. You can also opt for more natural options, such as a mouthwash with salt water or baking soda.

It is also possible to boil a few cloves, let the liquid cool, and use it as a mouthwash.

8. How Do I Know if a Tooth is Devitalized (Root Canalled)?

Normally, it is pulpitis that can lead to a root canalled tooth. It is common to have a root canal treatment because the pulp of the tooth has been affected.

In this case, you will know that the root canal treatment has been done properly when you no longer feel the pain that brought you to the dentist.

9. Why Should I Crown a Root Canalled Tooth?

This is why a root canalled tooth without a crown usually breaks fairly quickly.

10. How Long Does the Pain Last After a Root Canal Treatment?

After a root canal treatment, the pain you may feel usually lasts a few days.

You will have pain in your jaw, maybe some swelling. But after 4 days, the pain should be gone.

Clinical and histopathological characterization of root resorption in replanted teeth

How to Fix Overcrowding Teeth?

Infection After Wisdom Tooth Extraction: What to Do?

My Child’s Permanent Teeth Are Coming in Yellow, What Can I Do?

How to Stop Grinding Your Teeth at Night?